Despite the heat, Cyann convinced Grayson that they had to have at least one barbecue in their back yard and invite people over.  Grayson agreed to make her happy.  So today is the barbecue and guests are enjoying items Cyann and Grayson are serving.  Of course they invited close friends, some of whom we allowed to extend invitations as well.  Everyone is having a good time. 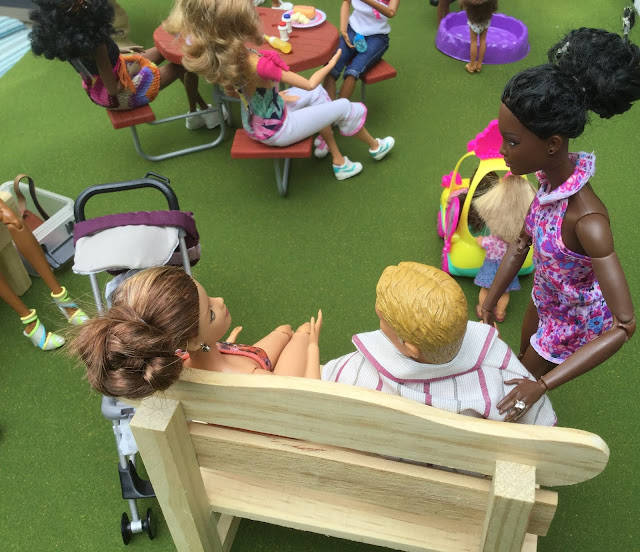 Ember:  Is he asleep?  You know I need my baby fix.
Avery:  No, but he's been fussy, so I want to leave him in there a little longer.  He's just a little cranky, probably the heat, so I'll either see if he's okay with a dip in the kiddie pool or have to take him inside for a little while.  I'm hoping keeping him under a little shade will keep him calm.
Ember:  I understand.  Well, if you get to the point you want him inside or just want a break, Auntie is here.
Avery:  Thanks, Ember. 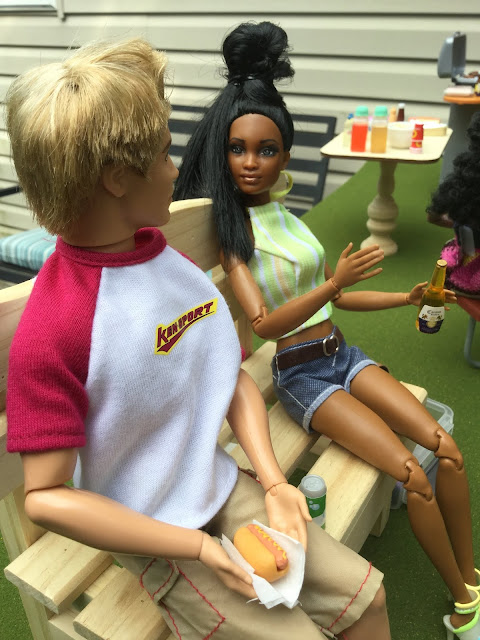 Syren:  So when are you going to put on a ring it, Brett?
Brett (blushing):  Oh, don't worry, I think Marlin's definitely the one.  It's just that sometimes I don't think she believes she is.
Syren:  What do you mean?
Brett:  Sometimes she doesn't think she's worthy of being treated well, but at the same time I know she wants to get married.  I think she holds herself back.
Syren:  Well, I know she loves you and wants to marry you.  I think she's just afraid to get her hopes up and then be crushed.  That's all.  But I'm sure she'll be all in if you ask her.  And, I can make myself available for ring shopping.
Brett (laughing):  I appreciate the offer.  Thank you. 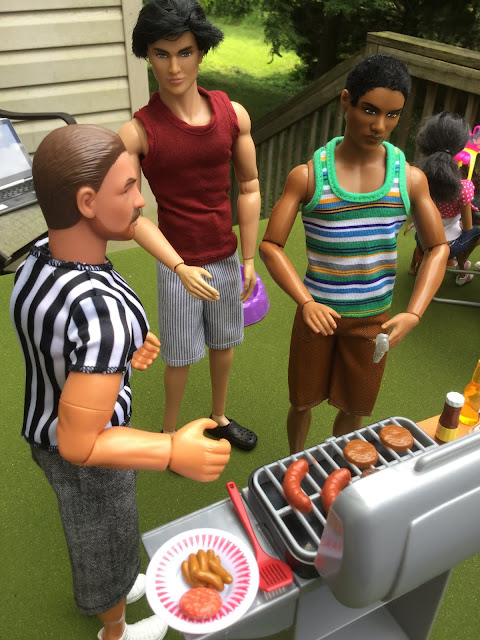 Craig:  Would you like me to get you another beer, Grill Master?
Grayson:  Thanks, Craig.  Can you also bring water.  I don't want to pass out.  You know the beer to water ratio is important.  Tomorrow's hydration starts today.
Chase:  I like that.  It's true.
Grayson:  Chase, I thought we were going to be seeing you and Chambray jumping that broom soon, Man.  What's your hold up?
Craig:  Do not encourage this man to put that ball and chain on too quickly. 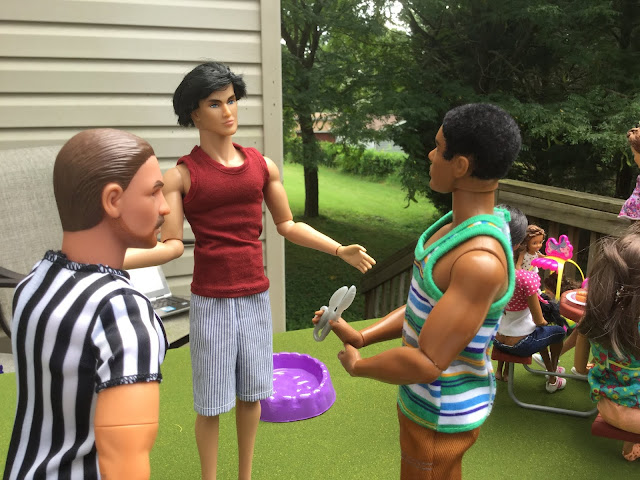 Chase (laughing):  Chambray can be complicated.  She's an independent woman, but still likes being dependent that I'm here.  Besides, my mother once mentioned us getting married and Chambray lost it.
Craig:  Why would she do that?
Chase:  I think it was about my mother mentioning the prenuptial agreement.
Craig:  Do you agree with your mother about having one?
Chase:  I think so.  Don't you have one?
Grayson (chuckling):  Us regular, stainless steel spoon people don't even think about things like that.  Craig:  Nope.  We know it's just the deal and if we get left, well, we suck it up.
Chase:  Oh!

Chambray is out of town for a photo shoot, so Chase had to come alone. 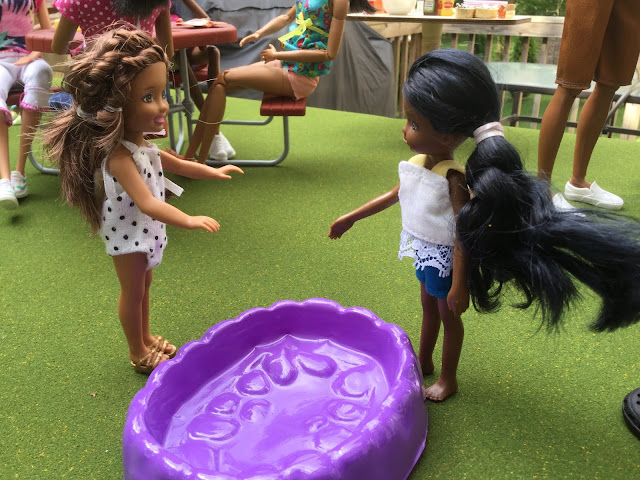 Erwyn:  Are you getting in the kiddie pool?
Brenna:  Sure.  Well, my feet at least.  I have to be sure Brookie doesn't drown.  Are you getting in?
Erwyn:  It's a baby pool, it's too small.
Brenna:  It's not that bad, besides, it's really hot out here.
Erwyn:  I know, right? 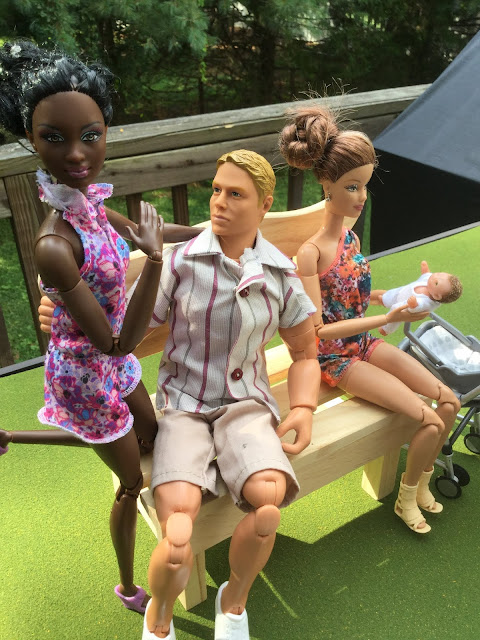 Ember (seeing new guests arrive):  Uh oh!
Parker:  What's wrong, Babe.
Ember:  It's Maurice and Chi.  She's the yoga instructor for the class Cyann and I take. I'm assuming since they walked in together, she's his new lady.  Did you know he was coming?
Parker:  Yes, Grayson told me he was inviting him.  We like Maurice and you know I see him at his gym.  So they know each other, huh?  Small world.
Ember:  She's a great yoga instructor.  I like her.  It is a small world.  I had no idea she and Maurice were dating. 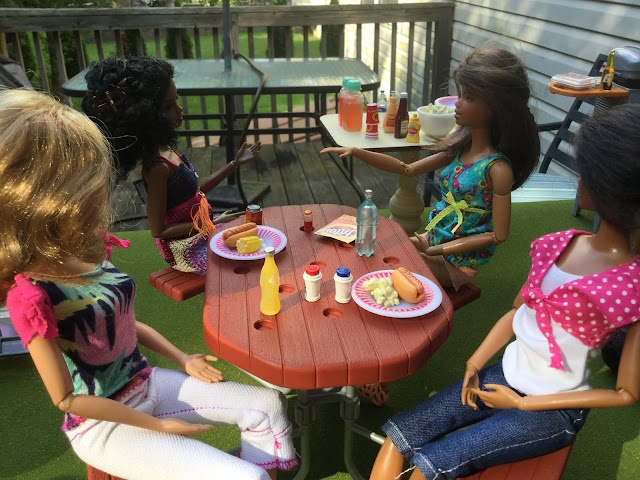 Henna:  What the hell?!  What is he doing here and with her?
Cyann:  Grayson invited him, Henna.  They hang out sometimes and while we know you broke up, he's welcome here.  Keep your cool.
Henna:  I am cool, Cy.  I just didn't expect to see him, let alone with his new girlfriend.
Cyann:  Girl, you're tripping.  Let it go. You haven't been with that man for a long time now.  But maybe if you throw him some for old time's sake and give him what he wants, marriage, you can have him back.  Until then, he's somebody else's guy.  Get a new man.
Henna:  Yeah, yeah.
Cyann:  Chi is pretty cool.  You'll like her.
Henna:  Whatever.

Cyann goes over to greet her guests. 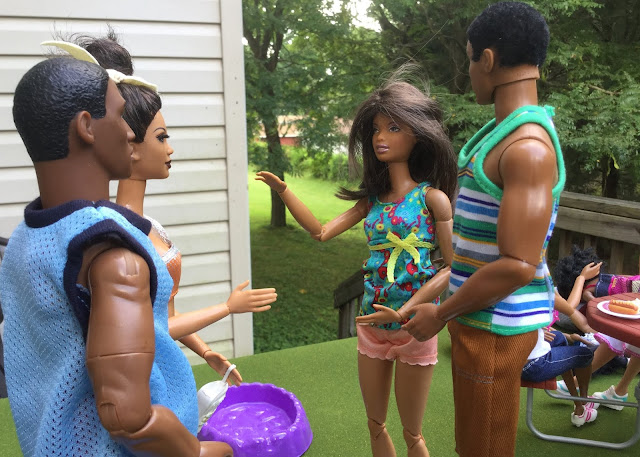 Grayson:  Hey, Maurice.  Thanks for coming.
Maurice:  Hey, Guys.  I'd like you to meet my lady, Chi.
Grayson:  Hello.  Welcome.
Cyann:  Hi, I know her.  This is Chi, my yoga instructor.
Maurice:  You know each other?
Cyann:  I sure do know her.
Chi: Yes, she's a great participant.  Good to see you, Cyann.

Look who else is in town. 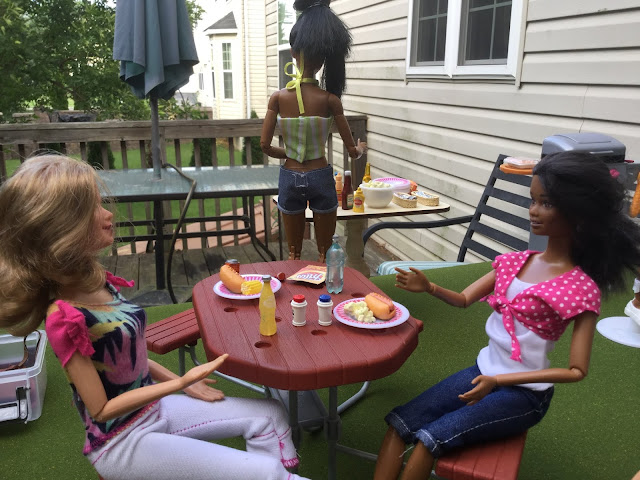 Fatima: So, Bonnie, do you and your husband ever go to Florida for vacation?  If you ever want to know about some nice places to visit or hot spots, let me know.
Bonnie:  No, my husband is not that kind of traveler.  I mean, he goes out with his friends on road trips, but not the two of us.  I mean, he's a guy who likes hanging out with his buddies, I guess.
Fatima:  So while he's on his road trips, do you take road trips with your friends?
Bonnie:  Uh...no, I don't. I stay home to make sure the house is clean.  Plus, I don't work, so I don't try to make him budget for me to take vacations.  I mean, he works hard and I take care of our small home.  It works, you know?
Fatima (raising an eyebrow):  Well, if it works for you.  If you'd ever like to come visit me in Florida, you're welcome.  It won't cost much so it shouldn't break your budget.
Bonnie (sheepishly):  Thank you. That would be nice.

While Maurice doesn't want to cause any drama, he would feels it would be even more awkward acting like he doesn't know Henna.  At the same time, he is concerned about what Henna may say which will make things worse.  The last time he saw her, he took her home from Reds' (recap here) he made a mistake and kissed Henna when he dropped her off at home.  When he volunteered to take her home, he honestly didn't think it would be a problem and would stay completely platonic.  But there she was, the woman he wanted to marry and have children with. There she was, the woman he once enjoyed spending time with and being intimate with for months.

Henna was wearing a familiar fragrance, looking just as beautiful and sexy as ever, so he did not resist when she leaned into him and kissed him.  He had forgotten himself and his resolve for just a few seconds, but it was enough for him to both enjoy and feel guilty about.  When Henna asked him to come in, he almost gave in and went.  But he realized what should have stopped him from kissing her at all - as much as he had loved her, she didn't want to commit to being with him.  Maurice was with a woman who knew she wanted to get married at some point and have children, just as he did.  Even though she may not become his wife, the possibility was there and he owed her better than a cheating on her.  How far he had gone with the kiss was bad enough, but now he would go too far if he allowed himself to give in to his attraction to Henna.  He thanked her, but declined.  Worse yet, Henna told him that if he ever changed his mind, the door was still open.  A temptation he wrestled with from time to time, but continued to fight as he reminded himself of how lovely, engaging and motivated Chi is.  He just hoped Henna would let it go and not bring up the kiss. 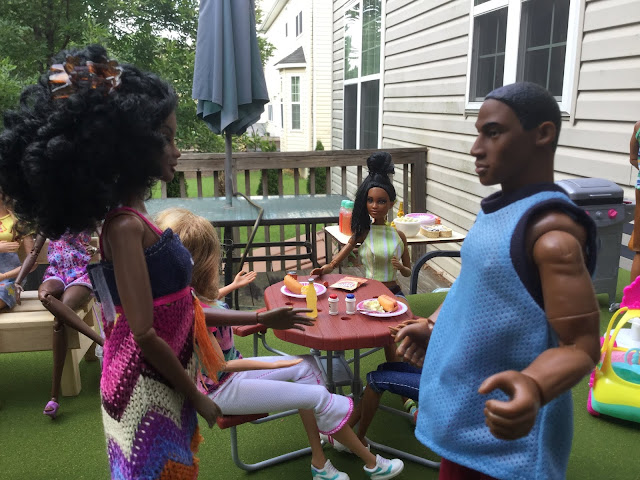 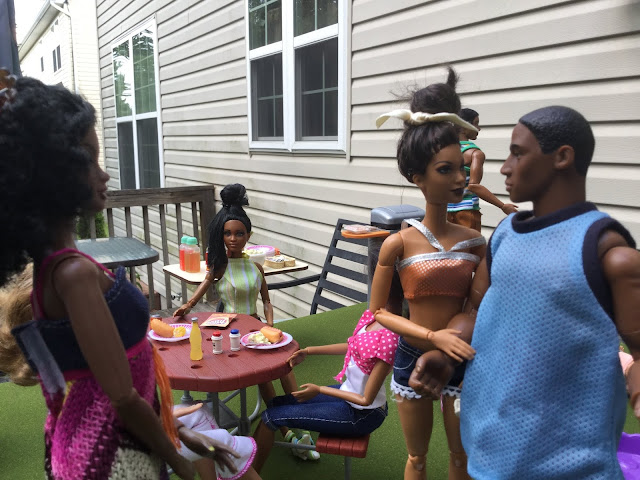 Chi:  Honey, would you like a plate?  I can fix you one, if you'd like.
Maurice:  Aww.  Thank you, but I'll get my own plate.  You should enjoy yourself, don't worry about me.  Do you remember Henna?
Chi:  Yes, we met at the restaurant, right?  How are you?
Henna:  I'm good.  You look very nice.
Chi:  Thank you.  I love to stay in shape.  Healthy body, healthy mind. You should stop by my yoga class and give it a try.

Ember invited her new business contact, Somali, and her family to join the barbecue.  They have just arrived and Ember, seeing them, goes to greet them, pulling Parker with her. 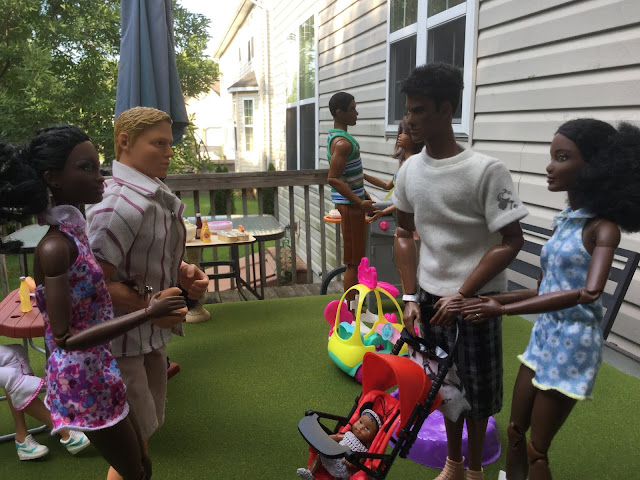 Ember:  Hi, I'm so glad you could make it.  This is my fiancé, Parker.  Parker this is Somali and her husband.
Crain:  I'm Crain.  Pleased to meet you.  Thank you for inviting us.
Somali:  Hi, I'm pleased to meet you, Parker.  Ember, this is a lovely neighborhood.
Ember:  Yes, Cyann and Grayson have a nice home.  Hi, Azure.  Isn't she pretty, Parker?
Parker:  She certainly is.  (he waves at the baby) Hello.  Crain, after you get introduced, you can come hang out with us guys for a few and we'll tell you everything we know about living here.
Crain:  Sounds good.

Ember introduces Crain, Somali and Azure to everyone before Crain wonders over to where they guys are gravitating.  Brett is asking questions about marriage. 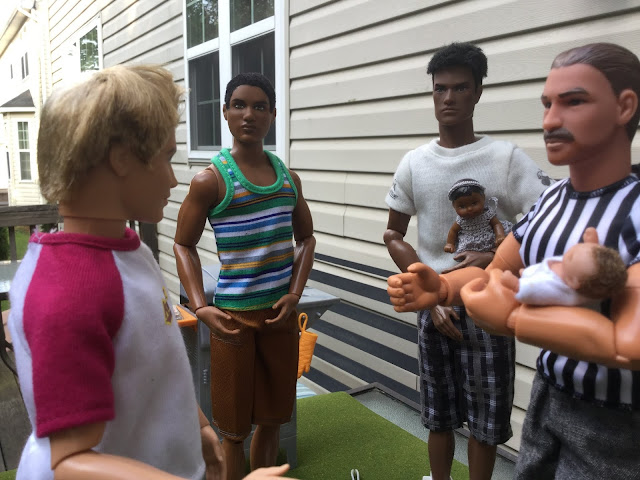 Brett: And how do you get out of the doghouse?
Craig:  Man, if there were an easy way, we'd bottle and sell it to be millionaires.  You just have to wing it and do your best at groveling.  As a matter of fact, master groveling.
Grayson:  But do yourself the favor.  The few times she admits that she is in the doghouse, milk it.  Milk it because it won't happen often.  You may even want to document it to have proof it happened.
Crain:  I don't know you guys, but I can agree with that one.  Milk the crap out of it because it is a rare thing.

This looks like a good barbecue.  Caught a few candid shots of the fun and fellowship. 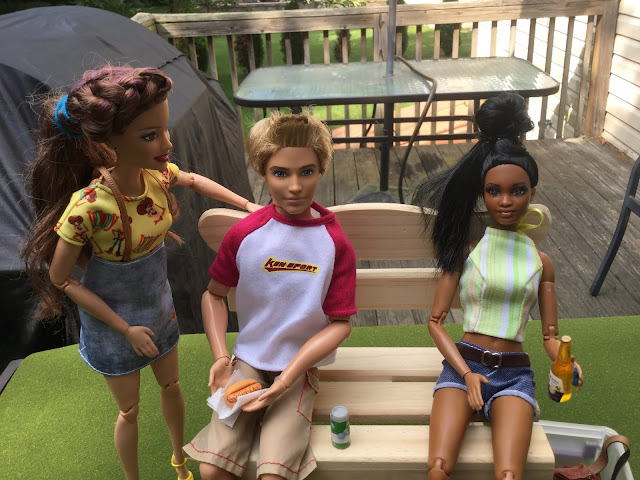 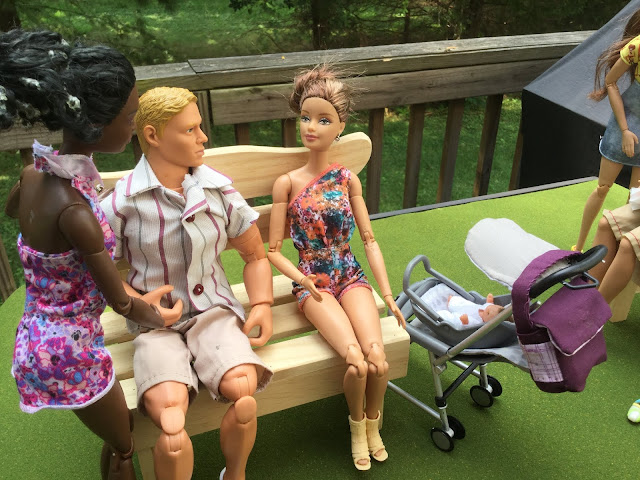 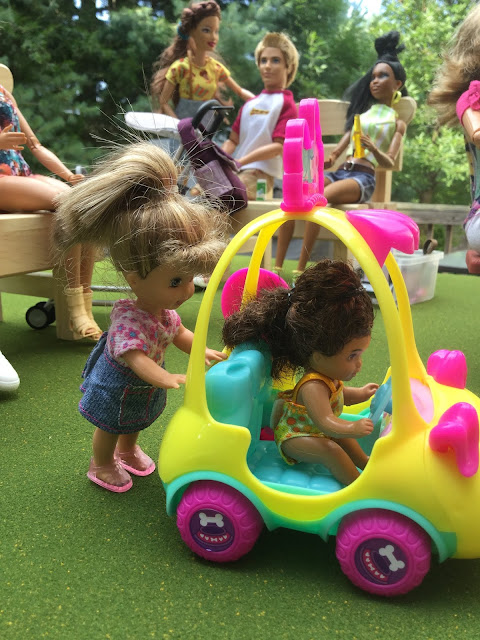 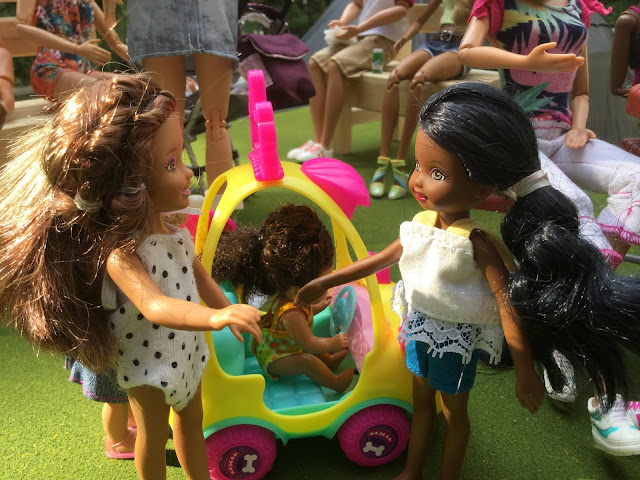 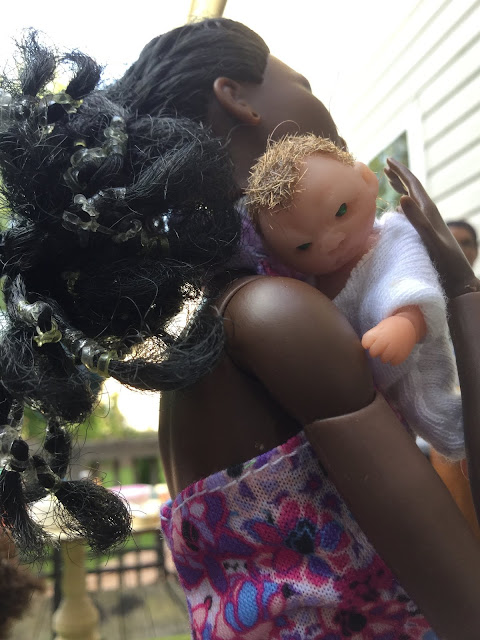 Ember got her baby fix.

By the way, just disregard all of the background stuff that seems out of scale.

Thanks for stopping by. ~ Jaye
Posted by Jaye's Doll Space at 6:04 PM

Hi. I truly appreciate your reading my blog and your comments. I enjoy the interaction. As soon as I check to be sure your comment is not from a bot or some other unreliable source, it will be posted.

Have a great day!